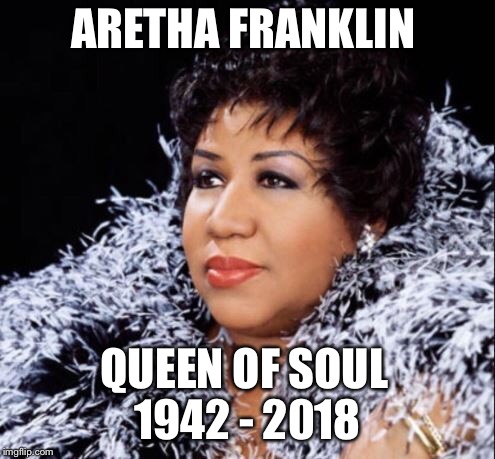 The Queen of Soul Aretha Franklin Dead at 76

The Queen of Soul Aretha Franklin Dead at 76

Aretha Franklin, the self-taught piano prodigy, vocalist and songwriter who first conquered the charts in the late ’60s and never relinquished her throne, died Thursday morning of advance pancreatic cancer of the neuroendocrine type, her publicist confirms to PEOPLE. She was 76.

“Aretha helped define the American experience,” former President Barack Obama said in a statement. “In her voice, we could feel our history, all of it and in every shade — our power and our pain, our darkness and our light, our quest for redemption and our hard-won respect. May the Queen of Soul rest in eternal peace.”

Born on March 25, 1942, it could be said of Aretha Franklin that music was woven into the fabric of her being. Not only was her birthplace — Memphis, Tennessee — one of the most important cities in the history of blues and rock ‘n’ roll, but her father, C. L., was a Baptist minister and gospel singer known nationwide as “The Man with the Million-Dollar Voice.” He moved the family to Detroit — another musical hotbed — in 1944. Aretha’s mother, Barbara, was a singer as well, although she left the family when Aretha was just six and died four years later, the first in a long string of heartaches that would run through her life.

By the middle of the 1950s, Aretha had learned to play piano and, along with her sisters, was singing in her father’s church choir. She also toured the gospel circuit with C. L. during this time and became acquainted with the likes of Clara Ward, Mahalia Jackson and Smokey Robinson, as well as civil rights figures such as Martin Luther King Jr. and Jesse Jackson, who were among her well-connected family’s many notable friends.

But soon life began to move quickly for Aretha. In 1956, at age 14, she gave birth to her first son, Clarence, and released her first album, a gospel recording called Songs of Faith. Two years later she gave birth to a second son, Edward, and after being courted by Sam Cooke to sign with RCA Records and Berry Gordy with his Motown label, in 1960 she signed to Columbia Records and moved to New York to begin her career. READ MORE

Check out the Classic Tribute mix